Skip to content
Posted on June 19, 2014December 25, 2018 by Tonia Stephenson
With a decision on the state’s proposed budget looming, supporters of locating the Western North Carolina School of Science and Math in Morganton are being asked to contact three key legislators without delay.
Rountree Collett is one of many community, business, elected and educational leaders involved in the effort. “We started out with companion bills — sponsored by our Burke County delegation — that provided funding for the advance planning for the project,” Collett said. “Unfortunately, the initial Senate budget stripped out the funding but left in place language generally favorable to the idea of our goal.  We were initially worried about the same thing happening in the House, but we succeeded in getting amended language into the final House budget providing the funding for advanced planning.”
Now the House and Senate versions of the budget are headed to a conference committee where differences between the two versions — including the funding provisions around the WNCSSM will be worked out. Collett said the goal of supporters is to keep the House’s language in the final budget bill.
The Burke Chamber is one of many organizations across Western NC supporting the plan to place the school in Morganton.
If you or your company support this regional effort, please consider calling, e-mailing or writing the following key western NC Senators right away and encouraging them to work with Senator Warren Daniel to keep the House version of the western NCSSM language (specifying Morganton location and funding) in the final budget bill:
Senator Dan Soucek      Dan.Soucek@ncleg.net
919-733-5742
NC Senate
300 N. Salisbury  Street – Room 310
Raleigh, NC  27603-5925
Senator Austin Allran      Austin.Allran@ncleg.net
919-733-5876
NC Senate
300 N. Salisbury Street – Room 625
Raleigh, NC  27603-5925
Senator Ralph Hise        Ralph.Hise@ncleg.net
919-733-3460
NC Senate
16 W. Jones Street – Room 1026
Raleigh, NC  27601-2808 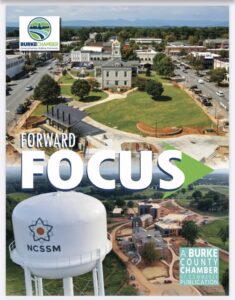